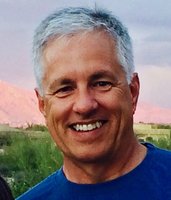 Raymond W. Topp was suddenly taken from us on Friday afternoon, July 20th, 2018 of Cardiac Arrest in Tucson, Arizona. That day has left us in shock and disbelief that he was here one moment and gone the next. He was only 65 years young and had many plans for his life yet to fulfill. Just recently, he stated that if he were to go, he wanted it to be "lightning speed." We didn't know that God would take his comment literally, because with his quick wit and dry sense of humor, we sometimes didn't know when we could take him seriously. Ray was fun loving, always good for not just one laugh but many. He may have used a swear word (or two) on occasion, but that along with his fun spirit, was what always made us smile. Ray could talk to anyone, anywhere, and friends were made. He was the kind of compassionate man that would give the shirt off his back to someone in need, or crack a joke to lift someone's spirit. Ray wasn't the kind to hold back, often times chiming in with his hilarious commentary. He was the firstborn son of Iris and Jack Topp of Lacrosse, Wisconsin. He grew up in the Wedgewood Terrace neighborhood, attended St. Thomas More elementary, followed by Aquinas High School and then graduated from the University of Wisconsin-Stout. Ray was employed by Custom Iron in Zumbrota, MN for over 17 years selling and creating beautiful metal works. Custom Iron allowed him to move his job to Tucson, where he continued to work for them from home. Ray passionately loved his family and pets, going to family gatherings and reunions, as well as social hours of any kind where he could be with friends. He enjoyed small town local establishments... many visited while riding his Harley motorcycle. He often attended concerts, loved rock n roll as well as swing band and 40's music, and was known to belt out a few notes or lyrics to make us laugh. He loved a good bourbon and it was fun to gift him with the latest unique blend or bottle that he didn't have. His collection grew to warrant his own cabinet that he was pretty proud of. Ray was an avid reader, loved a good murder mystery or anything history, he could finish one book and move on to the next faster than anyone! Ray was an avid Green Bay Packer fan, and would drive miles to see his team play somewhere in Tucson. The La Crosse Oktoberfest celebration was one of his favorites to attend over the years, but his all time favorite vacation was "Bass Lake" every year for the past 37 years with his brothers and best friends. What happened at "BL", stayed at "BL". Ray was an amazing craftsman, a perfectionist that impressed anyone that knew his work. He could fix just about anything and he would often offer his abilities to others that needed help. He was married to me, Jenny Nelson Topp in 1988 and we celebrated an incredible 30 years of marriage together in May of this year. It's hard to believe that I've spent over half of my life with this wonderful man. We truly had so much fun together and were partners in our life through and through. When we moved to Tucson 5 years ago, he was so happy to live in the sunshine everyday and never have to shovel snow, rake leaves or mow grass again. He loved everything about our home, the Sonoran desert, mountains, sunrises and sunsets. All of it's beauty we enjoyed together. Ray wouldn't be Ray if we didn't hear a gripe or complaint now and then, most often just to make fun. He wasn't fond of the idea of putting in a swimming pool, after all, that would spell maintenance. So in his normal fashion, he had to protest a little. But he ended up loving the building process and once it was finished, he was the first one in the water at only 65 degrees. The pool became one of his favorite past times and relaxation on a floater with a drink in hand and music blasting was the new norm for him. We both shared a love of the various native cactus varieties and plant life of the desert. With hard work, we landscaped our entire yard together. This was an every weekend event for us and we loved this challenging and immense project. There was always room for another cactus, tree or plant. Aside from me, Ray is survived by his mother, Iris Topp, his sister, brothers and their families... Patty, Jeff and Michelle Oswalt; John, Janice, Maddi, Jackson and Maria Topp; Steve, Kelly, Turena and Michael Topp; his in-laws Richard and Rita Nelson; Mitch and Lori Isch; Carin Nelson and Elaina Hall; his lifelong best friend Jon Erickson; his special hiking companion, Golden Lab Ginger; many wonderful relatives, friends, and neighbors who dearly loved him. Ray was preceded in death by his father Jack Topp, his Godmother Aunt Edie Jambois, as well as other loved ones. Ray did not want a funeral or service, he would rather have a party. In keeping with his wishes, a gathering of family and friends will be arranged and held in his honor in La Crosse, Wisconsin at a later date to be announced. Memorials in Ray's honor may be given to these charitable organizations that he was passionate about, Arizona- Sonora Desert Museum, The Tucson Cactus and Succulent Society or the Fox Tucson Historical Theater. Rest in peace Ray. We hope you had a most amazing reunion with your father, Jack and you are now playing a game of bridge together. We love you and will miss you more than you will ever know and you are forever and always in our hearts.