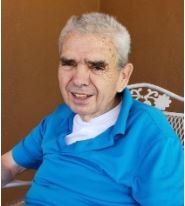 Jerry C Harris, 79, of Tucson, AZ passed away July 30, 2020.  He was born to Clarence and Sybil Harris on June 10, 1941 in Benson, AZ.  Jerry graduated from Tucson High School in 1959.  He married Marlene in 1963, who survives him.  He is also survived by daughter Linda (Jeffrey) Swango of Tucson and son Gary (Duena) Harris of Gilbert, as well as four grandchildren Haley Harris, Douglas Swango, Grant Harris, and Julianne Harris.  Jerry was predeceased by his parents, his sister, Norma Smith and brother, Jack Harris.

Jerry was a self-made man.  He worked hard and with Marlene owned and operated Arizona Certified Electronics for 22 years.  Following the acquisition of Arizona Certified Electronics Jerry worked for SPX and served as National Service Trainer which allowed him to travel across the country meeting new people, something Jerry loved to do.  Jerry completed his career with Thermawave supporting Intel and other semi-conductor manufacturing plants in the U.S. and U.K.  He loved learning and in his retirement years he joined the Christian Writers Group in Tucson. He wrote and self-published 11 books.

Jerry was a man of faith.  He was a member of St. James UMC for 37 years. He was also a member of Gideons International.  He also was a member of Tucson Lodge No. 4 F&AM.  He served the Lodge as Master in 1985.  He was the Charter President of Sahuaro High Twelve club.

Jerry loved the outdoors.  He enjoyed camping, hiking, hunting and exploring the desert and sharing it with his family and friends.

A Celebration of Life with Masonic Services will be held on

The family has asked for all attendees to wear face coverings for the safety and well-being of all attending.

In lieu of flowers donations may be made to

To send flowers to the family or plant a tree in memory of Jerry Harris, please visit Tribute Store

Share Your Memory of
Jerry
Upload Your Memory View All Memories
Be the first to upload a memory!
Share A Memory
Send Flowers
Plant a Tree