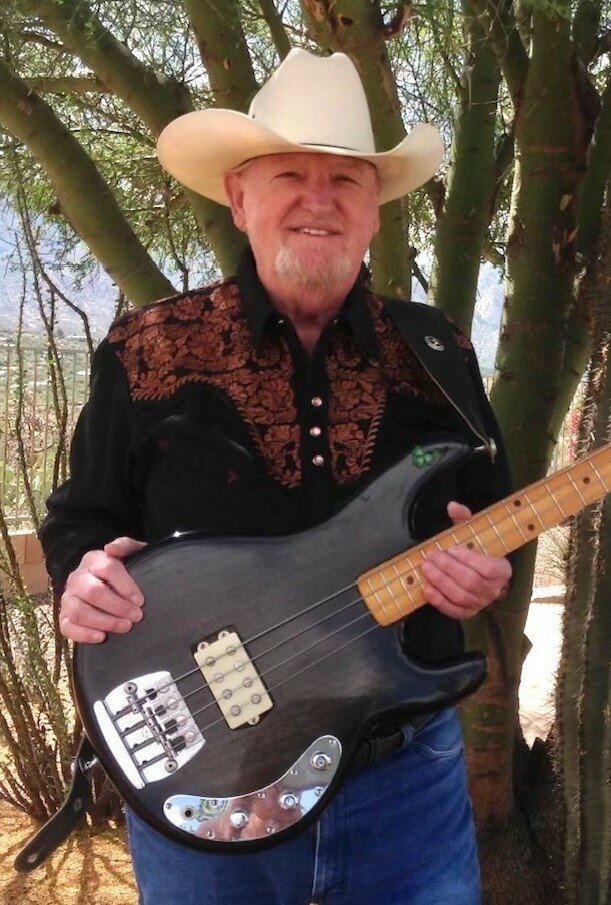 On August 3, 2021, Ray Harrison, loving husband, father, and grandfather, passed away at age 79 after a brief illness.

Ray was born on March 2, 1942 in San Antonio, TX to Charles and Ruby (Rutledge) Harrison. Ray spent 20 years in the U.S. Navy and retired as a Sonar Tech Chief. He was very proud of his years of service in the military. After retirement, he worked civil service transferring his naval service knowledge to supporting the fleet until his final retirement in 2005.

Ray’s passion was playing music. Country music was his favorite, specifically western swing. He was an accomplished bassist and vocalist, even being inducted into the Northwest Western Swing Hall of Fame in 2015. Some of his greatest joys were opportunities to jam with his fellow musicians, especially at Marty Robbins tributes or Steel Guitar Shows around the country. He loved leading worship at his church. Ray was an active and avid member of the Lion’s Club for 33 years in AZ and CA and believed deeply in community service.

Ray is survived by his loving wife Sandra, his children, Anna Allen, Cheryl Cline (Patrick), Daryl Harrison (Stephanie); his grandchildren LJ, Brittany, Amanda, Paiton, and Tanner and great-grandchildren Isaac and Mariah. He was thrilled to have added Farryn, Jordan, John and Genavieve as grandchildren with the recent marriage of Daryl and Stephanie. He is also survived by his brothers Chuck and Bill in Del Rio, TX.

His Celebration of Life will be held September 11th at 11am at the Catalina Mountain Elks Lodge.  In lieu of flowers, donations can be made in his memory to Harmony Hospice 1200 N El Dorado Pl Suite B200, Tucson, AZ 85715 or Catalina Oro Valley Lion’s Club.

To send flowers to the family or plant a tree in memory of Ray Harrison, please visit Tribute Store

Share Your Memory of
Ray
Upload Your Memory View All Memories
Be the first to upload a memory!
Share A Memory
Send Flowers
Plant a Tree