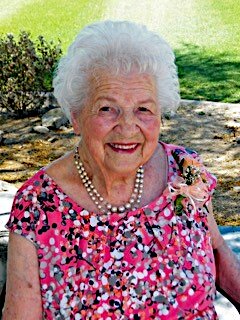 Genevieve Pais Mallow left this earth on December 3, after a long and full life, living to 104 years old.  She was a resident of Arizona since the 1980s and lived in Tucson the past 10 years.

Gena was born on May 12, 1917, on the family farm near Elyria, Ohio.  She was the seventh of 10 children, all first-generation Americans born of Romanian parents.   Gena was a star runner on her high school track team.   She went on to graduate in 1939 from the University of Ohio with a physical education degree and later coached the girls’ track team.

Gena met her future husband, Carl and fell in love. Carl served five years in the U.S. Army and they married in Cleveland on December 23, 1944.  Thereafter Carl earned his law degree (1947) and they started their family.  The family moved from Maryland and Colorado before Carl and Gena retired in Mesa, Arizona, where they enjoyed square dancing, working out and traveling. Family and Church were their priorities.

Their children,  Robert, of Golden (Kristi) and Carol, of Tucson (Mark) became Gena’s focus, love and pride.  The birth of her only grandson, Geoff, was one of her happiest moments.  Whether it was baking cookies, delicious lemon meringue pies, or dinners for 4 that could feed 8, she enjoyed her role as a mother and homemaker.  In her later years Gena remained physically active, even going to the gym five days a week through her 90’s.  After she hit the 100th birthday, she still worked with a personal trainer.

This physical and mental drive must have been a key to her long 104 year life. (Her love of bacon, meat and potatoes may have helped). The family is forever appreciative for the dedicated care of Amber Lights Senior Living caregivers and Heartland Hospice workers.  They are all special people who kept her healthy, happy and unconditionally loved.

Carl preceded Gena in death in 2004 after 60 years of marriage.  Gena is survived by two devoted cats, Toby and Tallie, her son and daughter, one grandson, Geoffrey of Lakewood (Lindsey), three great-granddaughters, and a sister, Eleanor M. Pais.

The family will hold a private ceremony at the V.A. National Memorial Cemetery of Arizona, Phoenix, Arizona, where Gena will join Carl forever.

To send flowers to the family or plant a tree in memory of Genevieve Mallow, please visit Tribute Store

Share Your Memory of
Genevieve
Upload Your Memory View All Memories
Be the first to upload a memory!
Share A Memory
Send Flowers