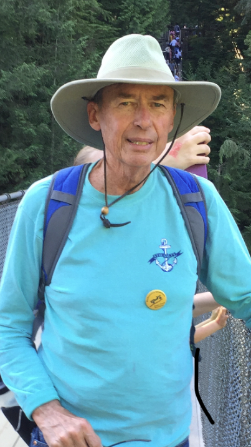 Roger Luvern Applen sadly passed away, surrounded by his loving family, on Saturday, October 22, 2022, at the age of 74 in Tucson, Arizona.

Roger was born March 10, 1948, to Howard and Thelma (Busse) Applen of Harmony, MN. After graduating from Harmony High School in 1966, he moved to Tucson, AZ where he attended the University of Arizona. While in Tucson, he met the love of his life, Nancy Stevens. Searching for their dream life, they moved to Colorado in 1975. While there he held various positions in the mining industry, both underground and later in corporate offices. After moving to Minnesota in 1982 to initially pursue farming, he eventually started a path that led to a very successful career as a software engineer. Roger began working for Metafile Information Systems in 1987 and later worked for Schmidt Printing from 1992 until retirement in 2014 all while earning his bachelors and masters degrees. Following his retirement, Roger and Nancy returned to Tucson, AZ to fulfill their dream of living there again.

He loved a bright sunny day on the golf course, long bike rides, spending time in the mountains and traveling across the country to see family and friends. Roger is remembered as a wonderful and compassionate man with unmatched generosity for those around him. Known widely by his children and grandchildren as the man who could not be beaten in the card game cribbage, he enjoyed spending time with them participating in a variety of activities. Roger had a passion for Minnesota sports teams, especially the Minnesota Twins, and was always a reliable source for updates on wins and losses.

He is survived by his mother Thelma; his loving wife of 44 years Nancy; one child Jennifer (Darrell) Fiedler of Casa Grande, AZ, from his first marriage to Eileen, and three children Eric (Emily) Applen of Rochester, MN, Christopher Applen of Mebane, NC, and Shelly (Matt) Clancey of Elon, NC from his marriage to Nancy; grandchildren Rebecca and Nicolas Applen, Annie and Ashley Clancey, and Rachael and Devin Fiedler; siblings Carolynn (Pat) DiTrocchio, Kathryn (Stan) Eide and Lana (Glenn) Soppa; along with many nieces, nephews and cousins.

To send flowers to the family or plant a tree in memory of Roger Applen, please visit Tribute Store

Share Your Memory of
Roger
Upload Your Memory View All Memories
Be the first to upload a memory!
Share A Memory
Send Flowers
Plant a Tree